Born in 1952, Kuhfeld studied at Leicester School of Art between 1972 and 1976. In 1978 he secured a place at the Royal Academy School of Art. During this time he also studied under the painter Peter Greenham CBE, RA.
While at the Royal Academy Schools Kuhfeld won various notable scholarships and prizes: 1978-79 David Murray Landscape Prize; 1979 Royal Academy of Art Silver Medal for Drawing, Royal College of Surgeons Dooley Prize for Anatomical Drawing; 1980 Elizabeth Greenshield Foundation Scholarship and Richard Ford Scholarship for study in Spain.
In 1985 the New Grafton Gallery in London gave Kuhfeld his first major exhibition, with the painter Christa Ga, which helped establish him as one of the up-and-coming members of the New English Art movement. In 1986 Kuhfeld was elected to membership of the New English Art Club. In 1992 he became an elected member of the Royal Society of Portrait Painters.
In 2012 Kuhfeld was commissioned by HRH The Prince of Wales to paint the Royal wedding of Their Royal Highnesses The Duke and Duchess of Cambridge. Prince Charles has been a patron of Kuhfeld and who has painted portraits for him of Prince William and Prince Harry in 1986.
In 2020 The Prince of Wales commissioned seven artists to each paint a portrait of a survivor of the Holocaust. Kuhfeld was commissioned to paint the portrait of Anita Lasker-Wallfisch.  These seven portraits were unveiled in 2022 and have now entered the Royal Collection. 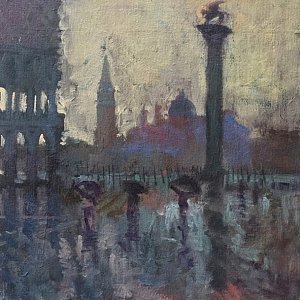