Carry Akroyd's work can be seen in our December exhibition.  Please click here to view the pictures.

Born in 1953, Carry obtained an MA in Fine Art from Northampton University. She became a member of the Wildlife Society of Artists in 2000 and from 2003 to 2006 was a Council member. Carry is a painter and printmaker and occasionally gives workshops and demonstrations on printmaking and screen printing. For Carry, screenprinting is directly about colour combining monoprinting methods with handmade stencils. There is always a dynamic between planned intentions and spontaneous reactivity to the emerging image - the interface between the deliberate, the impulsive and the accidental. Carry feels that the landscape is inextricably linked to the plants and animals that live in it. She wants her images to project a sense of a place without being too accurate - somewhere between a map and a memory - and her starting point is direct drawing in the landscape. Living in rural Northamptonshire, the arable landscape has been the main source of her imagery, punctuated by forays to wilder regions. Her interest in the landscape draws on many levels of fascination: history mainly, also geology, botany and wildlife. She is drawn to the nature of the unlabelled countryside trying to survive alongside agribusiness. Carry Akroyd's characteristically colourful and organised landscape images examine the relationship between humans and wildlife and reflect her sheer joy derived from the natural world. She thus continues the tradition of British writers and painters of natural history.
In 2009 Langford Press published a book called Natures Powers and Spells - Landscape Change, John Clare and Me in which Carry had 150 images printed. Subsequently she has been involved in a series of talks with John Clare relating to landscape change and her current work. In 2014 Carry was Winner of the Birdscapes Gallery Special Conservation Award. 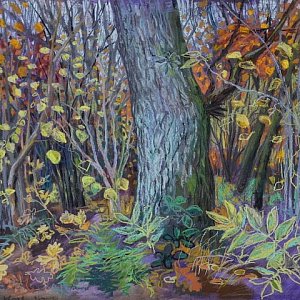 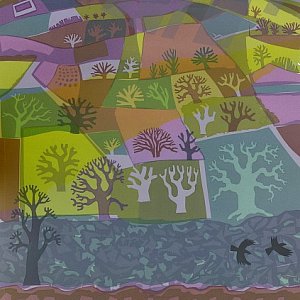 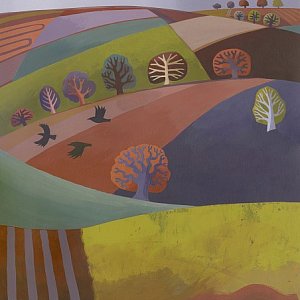