Terence Clarke, born in 1953, studied Fine Art at Lancaster Polytechnic before completing a three year Masters Degree at The Royal College of Art in 1979.  He began exhibiting his paintings on leaving College with various galleries in London.
Terence's work is characterized by strong drawing and the use of bold colour and is highly regarded for its composition. His landscapes and still life are richly worked with a subtle and expressive use of paint, with influences ranging from Cezanne and Matisse to the Scottish Colourists. Consequently his work is characterised by the use of bold but subtle colour with strong structural-drawing underpinning his vivid compositions. His paintings translate light into colour.
His motifs are simple but vivid, often filled with an intense light influenced by the time he spends working in the South of France, giving his paintings a Mediterranean feel. Terence Clarke stands in a tradition of artists who have continued to explore and extend figurative painting as a vehicle for the enjoyment of sheer visual delight.
His pictures are in collections in Europe and America and he also writes and illustrates articles for various publications. 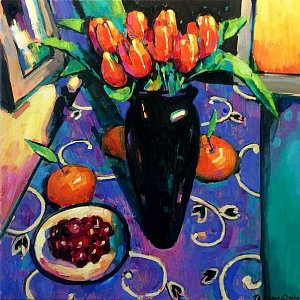