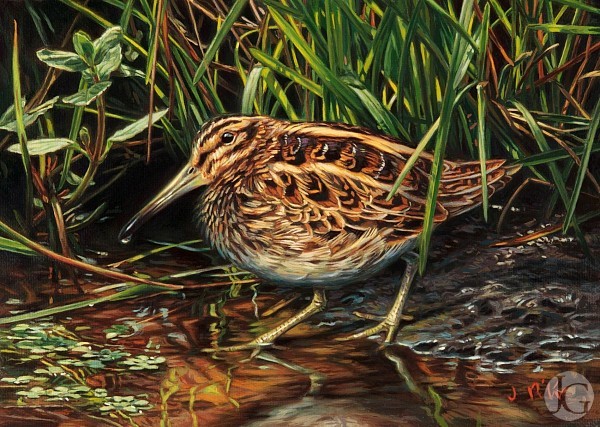 Born in 1974, Jonathan developed a love of the natural world as he grew up in the Middle East, through living collections of local scorpions, camel spiders and lizards. Once back in England his family moved to the countryside, where woods, water meadows and the down-lands of the Kennet Valley consolidated this interest.  The major part of Jonathan's work is based on British wildlife, particularly those animals and birds associated with the Sporting traditions and lifestyle. Living close to the South Downs provides endless opportunities for first hand observation and much of the local fauna of that area feature in his paintings.  His portfolio of work is also international, reflecting his travels in search of the unusual and exotic. He has made several trips to Asia in search of endangered wildlife such as monkeys, civets, bright birds and huge monitor lizards.  His work is held by several leading galleries but is represented primarily by Jonathan Cooper of Park Walk Gallery, London, where he had his first solo exhibition in 2005.  He has exhibited widely in the UK and also at the prestigious ‘Birds in Art' exhibition at Leigh Yawkey Woodson Art Gallery, Wausau, Wisconsin, USA..